Sustainability in the ACT: Community conversation with Shane Rattenbury

ACT Attorney General and Minister for Water, Energy and Emissions Reduction Shane Rattenbury will discuss the ACT’s progress toward 100% renewable electricity, the future of gas and environmental sustainability issues one year on from the 2020 ACT election.

He will be quizzed by young people in his electorate.

The event, part of the Sustaining Our Future Festival 2021 which is this year online, is hosted by the Social Justice and Environment Group, Holy Cross Anglican and St Margaret’s Uniting in Hackett, Canberra.

Welcome to our spring Sustainability Festival in partnership with St Margaret’s Uniting Church, which this year is entirely online. All events are free, open to all, and can be accessed via the usual Holy Cross Zoom link: https://adcg.zoom.us/j/5675297261

As part of the Festival, below you’ll find a gallery of images that celebrate nature / sustainability / the environment and/or the challenges of community during the pandemic. There will be a special section of the gallery especially for younger members, so please encourage our Holy Cross kids / youth to submit their photos and artwork. Please email contributions to gallery@holycrosshackett.org.au

Jamie Isbister, Ambassador for the Environment on the upcoming UN Climate Talks in Glasgow, in conversation with young people in Canberra

What is COP26 and what will it achieve?

Jamie Isbister, Australia’s Ambassador for the Environment heads to Glasgow in late October as part of the Australian delegation to the United Nations conference. COP26 will bring parties together to accelerate action towards the goals of the Paris Agreement and the UN Framework Convention on Climate Change. Isbister will outline the goals and challenges of the meeting as Australia comes under increased pressure to do more.

The event, part of a Sustainability Festival which is this year online, is hosted by the Social Justice and Environment Group Holy Cross Anglican and St Margaret’s Uniting in Hackett, Canberra. 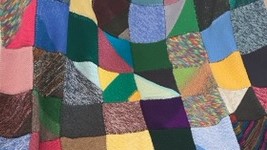 In Events and activities, Social justice

The Holy Cross stitching group has been making knitted blankets for homeless people. This was a collective effort of the seven ladies in the group. The stitchers knitted squares and then sewed them together with a crocheted border. There are between 96 to 108 squares in the blanket. Contact admin@holycrosshackett.org.au for more information about the blankets and the work of our stitching group.

How good is your chocolate? Your Chocolate Ethical Shopping Guide

At Holy Cross, as we prepare for Easter, we have been thinking about chocolate as a consumer choice and as something we enjoy at the end of Lent to celebrate new life in the risen Jesus.

Easter is the biggest chocolate shopping time of the year. But what’s really going into the chocolate we buy? There’s more than cocoa, dairy and sugar, there are hidden costs for vulnerable people, impoverished communities, and the environment.

Be Slavery Free, Green America, INKOTA, Mighty Earth, and National Wildlife Federation surveyed the world’s biggest chocolate companies to find out what they are doing to eliminate child labour from their supply chains, ensure farmers make a living income from their work, and prevent environmental damage caused by deforestation.

They have given each company a score across different categories so that you can buy Easter chocolates from the heart knowing which ones could be tainted by child labour and deforestation.

Chocolate’s great but tainted by child labour. Here’s what you can do about it.

Lent is a good time to consider how we celebrate Easter. In our religious and our secular lives, it’s increasingly mediated by chocolate eggs, not only on Easter Sunday but in the days before!

What do we know about the production of retail chocolate? Where does it come from? And how does it stack up against social justice Christian principles?

We know that the countries producing cocoa, much poorer than ours, are certainly not the ones consuming it. Australia is a growing market among traditional high-income countries.

What might come as a greater surprise is that hazardous child labour is widespread and growing.

A recent report from the University of Chicago, commissioned by the US Department of Labor, finds that there are more children, as young as five, working in the sector than there were in 2008-09.

In Ghana and Côte d’Ivoire in West Africa, where two thirds of the world’s cocoa is produced, an estimated 1.5 million children and teens under the age of 17 produce cocoa in dangerous conditions.

Minors use sharp tools such as machetes, carry heavy loads, burn fields and use other herbicides without protective gear.

Under pressure to produce ever-bigger yields, producers are using increasing amounts of toxic agrochemicals to control weeds and spreading into new areas cleared by deforestation.

Children told researchers they would prefer working in almost any other related industry because it would not be as exhausting and dangerous.

As Christians we should be unnerved. We are taught not just to respect other people but also support them to flourish, whatever their condition or stage of development.

The least we can do is try to prevent harm.

And, there are plenty of references in the Bible extolling honourable and enjoyable work rather than exploitative “toilsome labour under the sun”.

Back in 2001, big brands Mondelez, Nestle, Mars, Ferrero, Hershey and Lindt and the US multinational Cargill that collects much of the cocoa signed the ground-breaking Harkin Engel Protocol and the Framework of Action to Support Implementation of the protocol with cocoa industry representatives and the governments of Ghana and Côte d’Ivoire, undertaking to eliminate child labour and certified employmehnt practices.

Because the companies insisted they could self-regulate the protocol became a non-binding, although legal, agreement.

Twenty years on, its aims are far from realised.

The root cause of child labour is, of course, extreme poverty. COVID-19 has made things worse. Cocoa farmers currently earn less than A$2 a day. Estimates suggest if they earned just 3% more, they could afford to hire adults to do the hazardous work of handling chemicals and machetes.

The children and young people labouring in cocoa production would rather be going to school, playing soccer and dreaming of being doctors. Their parents would too.

Big Chocolate finally appears open to a binding agreement as the 20-year protocol reaches its expiry date this year – 2021 – a year the United Nations has co-oincidentally declared the International Year for the Elimination of Child Labour.

In response to survey questions prepared by charities, many of them Christian, 75% of companies in the industry backed mandatory due diligence which could include sanctions.

It’s a good time for Christians and all people of faith to get informed, pray and put prayers into action to help end child labour in the chocolate sector (and elsewhere). Actions you can take today include:

The Christian mission includes taking action to improve the lives of the most vulnerable. Children forced into involuntary work in the chocolate sector are certainly among them.

When we work to empower people – all image-bearers of the creator God – so they are treated well, social justice becomes part of evangelism.

It’s an idea well articulated by influential theologian John Stott: “The gospel lacks visibility if we merely preach it, and lacks credibility if we who preach it are only interested in souls and have no concern about the welfare of people’s bodies, situations, and communities.”

Toni Hassan is an adjunct scholar with the Australian Centre for Christianity and Culture. She is also a volunteer board director with Be Slavery Free and a member of the community of Holy Cross, Hackett.

Parishioner Toni Hassan, a director with charity Stop the Traffik Australia, traveled to Cambodia and Thailand earlier this year to see, touch, engage, laugh and cry with people impacted by modern slavery and those working to end human trafficking. She shared her high and lows with friends at an open-house event on the weekend.

Modern slavery is the fastest growing trade, the trade of people for exploitation, after illicit drugs. There are an estimated 40 million people in modern slavery, more people than at any time in human history. Poverty, poor governance, internal conflict and corruption are the perfect cocktail for modern slavery to thrive in, with women and children the worst impacted.

People often think modern slavery involves sex trafficking. Sex trafficking represents about a third of modern slavery cases. The majority involve forced labour in the high risk sectors including clothing manufacturing and seafood. Modern slavery exists in the supply chains of many of the goods we use and consume.

Watch this video produced by Stop the Traffik to know more: https://vimeo.com/324750705

There is good news. There are businesses and not-for-profits, secular and faith-based organisations working to prevent modern slavery, as well as a growing awareness among governments in the developed and developing world about the risks and how to mitigate them. Australia has adopted a Modern Slavery Act.

Toni showcased the life-changing work of these businesses and advocates:

You as a consumer can ask business about their supply chains and choose to buy ethically-made goods. You can also donate to a charity making a difference

Brooke Prentis is an Aboriginal Christian Leader from the Wakka Wakka
people, Aboriginal spokesperson for Common Grace and
Coordinator of the Grasstree Gathering.

Understanding the situation in Palestine/Israel

At the June meeting, our Social Justice and Environment group discussed the ongoing conflict in Palestine/Israel, and the urgency for us all to do whatever we can to bring about peace and safety to the suffering Palestinians and Israelis who need support to bring a lasting peace.

‘From Under the Rubble’ is an Australian award winning documentary focusing on the Samouni family in Gaza. It is a civilian perspective on the impact of Israeli armed  forces in Gaza. Directed by Anne Tsoulis it can be watched on line on vimeo on demand at:  www.roninfilms.com.au/feature/15257.

Holy Cross are hoping to host a speaker later in the year about Ecumenical Accompaniers in Palestine.

Holy Cross at the Palm Sunday 2019 Rally for Refugees

Members of Holy Cross church joined thousands of other concerned citizens of Canberra and surrounds at the Palm Sunday Rally for Refugees.

Churches were widely represented, with members from the Uniting Church, Caritas, Vinnies, Baptists, Quakers, other Anglican churches, and many more in attendance.

Following three excellent speakers, we marched around the city, heading up to London Cct in front of the Legislative Assembly, down Akuna St then past the mall and back to Garema Place.

Why were these parishioners under the Holy Cross banner representing our parish at this rally? Jesus in his teachings always stood for the poor, the dispossessed, the weak, the sick, the unjust, the unfortunate and the refugee. The parable of the Good Samaritan comes to mind. It comes down to honesty and love.